Mike Hopkins was the winner of the 2014 Nemmers Prize in Mathematics for his contributions to algebraic topology, stable homotopy theory, and derived algebraic geometry.  This May Hopkins returned to Northwestern’s Math Department, where he completed his undergraduate and graduate degrees, for a series of special lectures and events.  Following is the Mathematics Department’s full interview with Mike.  A selection of this interview was printed in the Mathematics Department 2016 Newsletter. 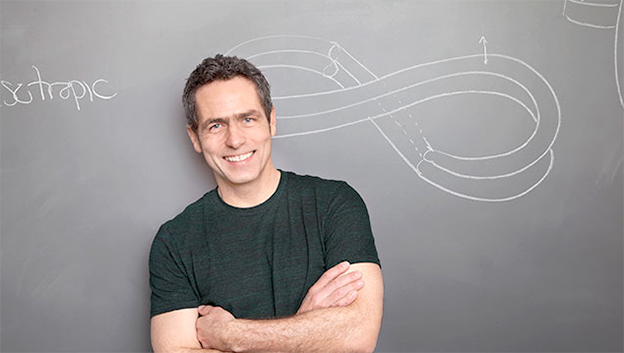 M: Mark is a very important person in my life.  I was here [at Northwestern] for a 3 year degree from ’76-’79 and then went to Oxford for a couple of years on a Rhodes scholarship.  I returned here for grad school and I wrote a second thesis under Mark’s direction, and that began a lifelong friendship and collaboration.

I knew [Mark] as an undergraduate, but I hadn’t really started working with him yet.  He was about the age of my father, and our nickname for him was “Dad” (because he just seemed like your dad.)  Mark was kind of a hero of mine when I was an undergraduate because everyone was around trying to understand the things he said.  I remember a visiting professor teaching an algebraic topology course was trying to read a paper of Mahowald’s and I asked him if he understood it and he said “Well, kinda. Barely,” and when I asked “How long have you been studying algebraic topology?” and he replied “20 years.” I remember thinking “WOW, someone can write a paper that’s hard, even for someone who’s been studying for 20 years.” It impressed me.

E: Is that what made [Mark Mahowald] a hero to you—his academic writing and thinking?

M: That’s an answer I suppose that changes as the years go by, but I think it is because he was clearly deeply admired and yet he was really humble and really generous.  I also liked that when you’d ask him questions, he would really think about what you asked. I really admired him a great deal.

E: Is that balance something you try to do with your students as well as to try to continue the mentor relationship you built with Mark?

M: I think I adopted some of [that balance.]  I guide a lot of young people into finding their field in math or figuring out where they want to go to school, and one of the pieces of advice that I always give is to pay attention to the little intangible things.  It is important to remember that you’re joining a community as well as joining an endeavor, and the sense that you fit in the community is a strong indicator that it’s a good intellectual match.  I was very lucky to find that.  I followed my best friend to college and came here not knowing anything about Northwestern’s Math department and I found this—Mahowald and that field here.  I really, really like the people in it. I really felt a part of it. I try to pass that on to my students.  I can’t live up to what Mark was, but I can try.

E: If you didn’t come to Northwestern thinking you would become a mathematician, what helped introduce you to mathematics and how did you fall in love with it?

M: I always liked math, I just didn’t really know you could do it for a living.  I played guitar in a rock band and Northwestern has a strong music department where I thought I would study music.  In retrospect I wasn’t really that good at it.  I had taken some pretty advanced math classes in high school and when I got here I didn’t want to take anymore calculus.  I met with Mark Pinsky, who was the person you talked with to figure out where you got placed, and he wrote some formula on the board and I lied—I told him I had seen it before and I started taking these really advanced math classes, and it just clicked.  I just loved it. The community here was a huge part of why I fell into mathematics. The grad students who I was hanging around with—after my freshman year I was taking classes with the grad students and I knew them all; I had an office here and was hanging around in the basement all night with all of them. It was just a wonderful community—really supportive, really exciting. Imagine sitting around a group of your closes friends where everybody is reading books and somebody says “wait I’m confused,” and then everybody just drops everything to help.

E: Many of our students pursue double majors in mathematics and music, but there is a large difference between music and math.  Was the choice of pursuing a career and community in math over something the arts something that felt natural?

M:  I think I was a lot better at math than I was at music, but there is some commonality there—something about a proclivity towards abstraction and being willing and able to focus narrowly on something.  I have a much stronger connection to the visual arts now. My wife is in the visual arts and ran an art gallery in Boston for many years and was a curator at a museum.  I love talking to artists about their process and work. There is something very similar to what we as mathematicians do in an artist’s process—trying to take on existing structures and see something outside of those structures in a new way. To watch a new generation look at old structures and see them differently, just because they’re a new generation and see things differently, is something I find really fascinating. I get into long conversations with artists about stuff like this.

Cloistering by Anne Lilly.  Image courtesy of the New Art Center, Newton MA.
E:  What kinds of visual arts are you interested in?  What common ground have you found in mathematics and these forms of visual arts?

M: I gave a public lecture in the winter of 2013 as a part of the series of lectures called “Catalyst Conversations” organized by a group of artists.  They have a person that is some kind of a scientist paired with somebody that’s a visual artist and they each give a 20 minute talk followed by a Q&A. I spoke with Anne Lilly who makes these really beautiful kinetic sculptures that look like they’re dancing, but they’re standing still.  With her I got to deliver a long talk about the ideas on invariance of shapes from particular perspectives and how different points of view overlap.  She and I met a few times, and I had a lot of fun discussing how she used math to develop her art’s structure and form, and linking my research to her sculptures.

E: It is interesting to hear you talk about mathematics appearing in the arts.  You have talked in the past about making math as universally accessible and understandable as other art forms like music or the visual arts.  Could you elaborate on this more?

M: After one public lecture a couple people said “that was really cool, but I didn’t get it.” No one would say that about music.  When you watch a play there’s a story you’re engaged in, or with music a narrative or theme that was played.  You aren’t trying to “get it”, you just experience it.  When we research math we’re trying to move something from the unknown to the known—we’re not trying to “get it,” we’re trying to figure out what the real question is. We’re listening to the math tell us what it’s trying to be and I just wanted people to—get it, you know, in their bodies.   I was trying to convey this in another lecture I gave later at the University of Nebraska and I started by saying “there’s nothing to  ‘get’ here,”  just experience and pay attention to this sense that something is working in a more regulated way than you might have thought beforehand and pay attention to that sense.  Maybe this is the thing in Anne’s sculptures too—something kind of unexpectedly organized in a way.

E: In the Harvard Gazette you mentioned how you liked seeing students grow and evolve, ushering in the dozens of students you have mentored into the community of mathematicians. What do you find to be the most enjoyable aspect of welcoming these students into the field, and watching their contributions change the mathematical community?

M: There’s so many phases of a student’s development that are really fun to see, so it is hard to choose. My first job [when meeting with students] is to help them find something they really, really care about. You’re going to work really hard on stuff you really care about. By the time I’m seeing them they have whatever mathematical ability they’re given and I try to get them to discover their mathematical taste. My first job is to figure out what really moves them and so it’s always really fun when we find that to watch that click and see a student suddenly really get into a topic and ask their own questions. That’s when the fire starts to light. It’s exciting. And it grows and grows and grows. Since I’m old enough, I’ve had students that became professors and have students of their own, and I’ve also gotten a lot of pleasure out of watching their voice at that level grow and watch them have their own impact in mathematics.

E: In your years of teaching what is one of the most exciting or interesting changes to the mathematical community that you have witnessed or been a part of in your mathematical career?

M: One game changer thing that I’m still sort of processing is an online discussion forum called Math Overflow.  Over the years it has become an incredible repository of information and discussions about mathematical issues. In recent years I’ve started to see the top undergraduates have a really sophisticated understanding of high level math.  It has been a huge jump.  What I realized was that Math Overflow gave a community and a place where a talented high school kid could go online and access digested mathematical information that just didn’t exist before. When I was young you had to go to a library and open a book—chances were there was no one you knew that could explain anything in that book to you and you just had to deal with the structures that way. But now, you can go on Math Overflow—that’s changed things a lot from where I sit.

E: What advice do you have for students and budding mathematicians today?

M: There are several layers to that question. I think the first thing is to really understand your tastes in math—what you like and what you don’t like. Those are the things more so than your abilities that will be the beacons that light your path. It’s important to heed the things you like and don’t like. The other thing to realize is that there are a lot of things you can do with math—way more than when I was young. You can go into biology, economics or all kinds of aspects of science. If you’re an undergraduate studying math, your math professors are people who decided to go into pure math and you sort of forget, and we also forget, there are many, many more opportunities.  Not everybody fits in the math academic framework. It’s important to remember that that’s not all there is—just because that may not be where you fit—it doesn’t mean there’s not a future for you in math. There’s a lot more out there.